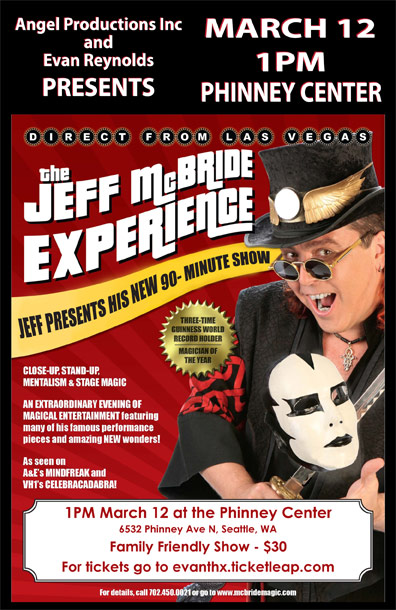 World-renowned magician Jeff McBride, named “one of the most influential magicians of the 20th century” performed a theatrical magic show and presented a “magicians-only” lecture.

Seattle’s Angel Productions Inc. and Evan Reynolds, widely known from “Evan’s Family Variety Show”, hosted an outstanding weekend of magic starring world-renowned magician, Jeff McBride. Three-time Guinness World Record holder McBride has performed on the great stages of Europe, Asia, and throughout the United States. MAGIC Magazine called McBride “one of the most influential magicians of the 20th century.” He has been on every major television network including A&E’s MINDFREAK, VH1’s CELEBRACADABRA and even had a part written for him on “Star Trek: Deep Space Nine”.

On Saturday March 12, 2016  McBride performed a 90-minute solo stage show in the Phinney Ridge Neighborhood Center in Seattle. This is was his full one-man Las Vegas show that has taken him around the world and on television. It is funny, has exhibitions of skill with playing cards, and is a show to provoke the feeling of wonder that only a magician who is the master of his craft can give you! The show was directly followed by a lecture that’s for magicians only, and the next day by an intensive workshop for magicians only as well. In addition to being an amazing performer, Jeff McBride is one of magic’s foremost teachers. He hosts regular workshops in Las Vegas and travels the world teaching with a constant goal of elevating the art form.

Evan’s Family Variety Show was founded in January of 2013 with the mission to bring the arts to families. Evan was performing in adult venues and really wanted to show the acts he was performing with to his children – corporate shows are private, and theater shows serve alcohol. So he created a show with the same top tier acts but in a setting welcoming to families with children – now parents can still see these acts that perform in the adult shows (jugglers, acrobats, magicians, and more) but they can attend with their children and share the fun with their families. This magic show is the first event from Angel Productions and Evan Reynolds to try a new format – not a variety show, but showcasing a single world-level performer, while still in an environment welcoming to families.

“My focus as a Seattle entertainer and producer is to make the arts accessible to families with children. We’ve been doing this for years with the Variety Show, and I am excited about bringing in a full evening show starring a Las Vegas magician with his full one man show and putting it in a venue that remains accessible to the whole family. Jeff McBride is also one of my favorite entertainers, and I am excited to see his show!“

“My mission as a producer is to empower artists, musicians, and creative thinkers to bring their unique and inspiring gifts to the world. The world of magic inspires so many, and I am honored to host such a phenomenally talented entertainer here in Seattle. What better way to enjoy one of your favorites up close and personal! These kinds of opportunities are few and far between. The concept is simple – Provide world class entertainment in an intimate setting that the whole family can enjoy while supporting a new wave of magic talent to emerge!”